Summary: Wet basements or basement moisture will cause mold, mildew, wood rot, illnesses and a lot of misery. Dry basements can be used for room additions.

All basement water problems and basement moisture problems are caused by poor or improper drainage of rain and runoff water outside the house.

It is impossible to have a dry basement without eliminating the source of water outside the house.

Build a basement the right way and you won't have to dig out around it to waterproof it or try and change the grading later. Unfortunately, that may be the only way to fix the basement water problem of an existing home.

But still, regrading or digging out around an existing basement and waterproofing if necessary could be cheaper than all the failed expensive efforts of trying to fix basement leaks from the inside.

On new basement construction or fixing an old basement, sloping the earth away from all sides of your house is the most critical element in keeping your basement dry

Here is an animation of simple construction details for a moisture-resistant basement from BuildaBetterHome.org, a very informative web site and a component of APA-The Engineered Wood Association.

Note: Absolutely NO part of the upper area of the foundation wall should be below the surrounding grade.

Install gutters and make sure that the downspouts are diverting water far enough away from your house.

If necessary, construct drainage swales to direct rainwater around and away from the foundation. 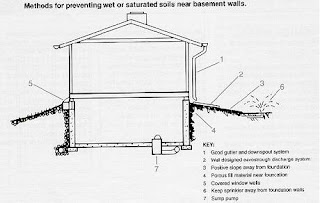 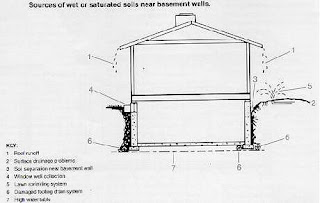 Obviously, waterproofing and grading the earth around the house is easier if you are building a new home.

If you are trying to fix a basement moisture problem on an existing home, there are no shortcuts.

And, if you want to create a comfortable basement living space you’ll need to insulate your basement for energy efficiency.

But, moisture in basements can reduce some or all of the interior insulating materials R values.

If the basement is (or will be) completely underground and you do create living space there, be sure there are two means of ingress and egress, otherwise it will not be code compliant and cannot be considered habitable space. See my Cost to Build in WA for more information on that,

Or, if your building site has a slope to it or is on a hill, you can build your foundation as a walkout basement.

So, whether you are building a new home or a home addition, or fixing an existing moisture problem on an existing house the secret to a dry basement is to waterproof the exterior basement walls, fill in the low areas and grade the entire area so that water drains away from the house, keep your gutters and downspouts clean and their discharge diverted away from the foundation, use covers over basement window wells, and install a sump pump that has a battery backup with charger for catastrophic occurrences.