Summary: A tubular skylight or solar tube adds natural light through a small tube. They are easy to install.

I had a client who wanted skylights installed during the remodeling of her attic bedrooms.

Due to the existing roof framing, low ceilings, and making room for another bedroom and bath it just wasn't feasible.

She was adamant though as she wanted more daylight in the new bed room and windowless hall.

I suggested a solar tube or tubular skylight. After investigation of this idea, she opted for two of them to be installed.

She was thrilled when the job was finished as they both accomplished exactly what she wanted.

The added pluses were that tubular skylights don’t leak like skylights are prone to, are more energy efficient than skylights and, they are far less expensive. 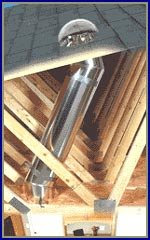 Many homeowners enjoy the natural lighting that skylights provide. However, skylights often do not distribute light evenly and are a significant source of energy loss.